We live in a technological age, and our children are surrounded by technology. According to various studies, children watch two and a half hours of television per day on average, and spend around an hour browsing the internet. Indeed, most households will have at least one tech-based gadget, such as an iPad or smartphone; in addition to a number of electronic toys. 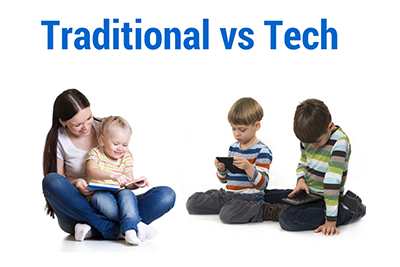 Certain electronic toys offer great learning benefits for children, teaching valuable educational skills in a stimulating engaging way. However, scientists are concerned that too much time spent on gadgets could slow language development – leaving children struggling to communicate effectively with their peers.

Kathy Hirsh-Pasek, Professor of Psychology at Temple University, has also studied the effects of certain electronic devices on babies. She commented: ‘A toy should be 10 percent toy and 90 percent child, and with a lot of these electronic toys, the toy takes over 90 percent and the child just fills in the blank.’

How Do Children Acquire Language?

The whole process of learning language is fascinating. Children initially learn by listening; tuning into the conversations around them, and in particular, how their parents interact with them. As your baby develops, it starts to respond to language, mainly in the form of babbling or gestures. And then, as time goes on, they learn more about body language, interpreting people around them, and how to use language to generate different responses. This is why communication with people and the environment is so fundamental – indeed, it plays a key role in language acquisition.

As you can see, significant factors in language development are interaction and leading by example. In situations where the parent is less talkative (e.g. when the child is observing an electronic toy) their valuable input is temporarily reduced. Of course, if this only occurs occasionally, it’s unlikely to be a problem. However, if electronic toys are used too frequently, this means that the valuable opportunity to interact with your child is minimized.

Which Old-Fashioned Toys Are Best?

If you want to help your child develop their language skills, here’s a list of the best traditional toys to invest in.

Language is one of the most important skills your child will ever learn. It not only helps them to communicate with others – it’s a valuable form of self-expression. It supports thinking and problem-solving, and helps us to develop meaningful relationships with those around us. The process of mastering language is the first important step in literacy – and forms the foundations for reading and writing.

Here are a few ways to encourage your child’s speech and language development.

Technological toys certainly have a place in the modern world, and can offer your child a variety of educational advantages. However, the importance of ‘old-fashioned’ toys, regular interaction and language development cannot be underestimated. Building blocks and books may have been around for centuries – but there’s a reason for that. Quite simply, they’ve been proven to be highly effective, not to mention fun!

If you’d like to find out more about toys that help your child to develop language skills, simply visit Kiddit. We’ve got a wide range of toys, suitable for babies, toddlers and older children on our website.

View all posts by kiddit →
Previous : How Educational Toys Can Boost Your Child's Development
Next : The Value Of Pretend Play For Your Child